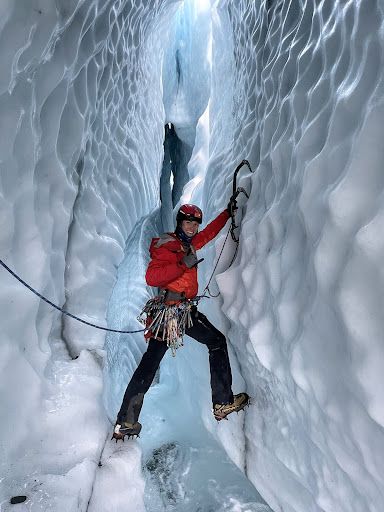 While Adam is originally from the urban jungles of New Jersey, he has felt most at home over the last few years among the Green Mountains of Vermont and the vast glaciers of Alaska.

After getting his start as a climbing/outdoor instructor while involved in the Boy Scouts, Adam initially came to Vermont to attend the University of Vermont. He quickly found a community of like minded people in the University Outing Club and the Vermont climbing community at large. While most of his classmates were out skiing, you could find Adam plowing through waist deep snow on his way to reach a scrap of ice dripping down a cliff. This passion soon led him to The Matanuska Glacier in Alaska where he has spent the last few summers guiding ice climbing trips between semesters. Now after graduating with a degree in Environmental Science and rambling around the Rockies, Alaska and Patagonia, Adam still can’t resist returning to the frigid cliffs of New England to show people the wonders of scaling frozen waterfalls.

Adam is a passionate teacher about a variety of topics ranging from climbing techniques to glacial geology to folk music. When Adam isn’t out in the mountains, you can find him playing guitar, whittling spoons or nerding out about rocks and trees